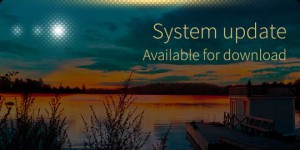 If you are unable to successfully configure the account, please visit account.jolla.com and try to reset your password.

Users running software version < 1.0.4.20
If your device is running software version lower than 1.0.4.20 and have WareHouse app installed (i.e you are using OpenRepos), disable all openrepo repositories before attempting to upgrade your device. Else, you risk breaking the device. Read important-steps-to-do-before-updating and how-to-disable-openrepos-repositories posts for more information.

Update the software
If your Jolla is connected to internet, an OS update notification should pop up shortly. If you just can’t wait, you can manually trigger an OS update check as follows:

* Open Settings app
* Go to System > About Product
* Pull down the pulley menu and select ‘Check for update’
* Once an OS update notification is received, tap on it and follow the instructions.

Do not reboot the device while the OS update installation is in progress. The process takes up to 10 minutes. During the update, the device screen might blank out. You can awaken the display by a short press on the power key to monitor the progress. When the upgrade has completed successfully, you will see the LED light up red before the device restarts.

In rare circumstances, you may have to try a second time to get through the update successfully.

Documents
* The SailfishOS Documents application, based on the open source Calligra project, is now open source under GPLv2-only license and can be found at https://github.com/sailfishos/sailfish-office
* Contributions to Documents and the SailfishOS browser are welcome. Join IRC #sailfishos on irc.freenode.net for further instructions.

Settings/Accounts
* Importing contacts improved in Settings > Apps > People
* Developer mode:
=> Acts as a DHCP server for the USB interface to ease the connectivity to PC’s.
=> no longer requires device reboots for enabling/disabling the mode (Note: ssh connections will work only after reboot)
* Finer-grained control options on sync related account settings
* Google account:Sync direction option for google calendar removed. It now automatically syncs bi-directionally.
* Supports automatic sync for calendar and contacts sync.
* Reset device has a more complete disclaimer about the consequences of doing so
* Internet sharing:
=> Default tethering device name is set during startup wizard based on the user information entered
=> Visual indication in lock screen when internet sharing is on

Mail
* Automatic retrieval of email settings for major providers
* Email credentials checking during account creation
* Possibility to create receiving only email accounts(without SMTP)
* Default port/authentication for generic accounts
* External images and resources are not loaded automatically without user consent [Settings > Apps > Mail] * Displays error notification if message cannot be sent in the outbox
* Option to accept untrusted certificates [Settings > Accounts > Account] (old accounts having untrusted certificates need this option enabled )
* Fixes an issue related to the priority setting in the email headers that makes some server interpret them as spam
* Fixes an issue related to the recipients separators in the email headers that makes sending fail for some servers
* Fixes an issue that prevents the correct display of some emails with “Content-Type: multipart/mixed”
* Fixes an issue that makes the body of some messages to be duplicated
* Fixes an issue that prevents sync from finish when fetching large amount of data over IMAP4 protocol
* Fixes an issue that causes wrong folder mapping for some Outlook.com accounts

Exchange
* Minimal Exchange Protocol version 14 support (Enabled for accounts that don’t support protocol 12, e.g Outlook.com)
* Notify user when the credentials have been updated on the server end or when provisioning settings change and sync can’t be performed anymore
* Provisioning improvements
* Fixes an issue that prevents contact avatars from being synced to the device (requires account recreation)
* General stability and performance improvements

Known issues
* System update notification may appear in the events view even after the software has been upgraded successfully.
* The notification will disappear automatically when the store client performs the first automatic check for software updates after reboot.
* Alternatively, you can clear the notification manually by checking for system updates [Settings > System > SailfishOS updates > Check for updates (via pulley menu)] * As noted in bug-my-apps-in-jolla-store-is-empty, we are aware of a problem with the Jolla Store that prevents some users from seeing their installed applications listed under “My apps”. It may also prevent some users from downloading applications. This will not effect the software update, we continue to work on this issue separately.
* Facebook account may need re-signing in on first boot after the upgrade
* Internet sharing favorite toggle switch can appear greyed out and unusable
* People app may take a long time to populate content on the first launch after the upgrade due to high load on contactsd daemon
* WLAN positioning does not work when internet sharing is enabled
* AGPS assistance data is limited in 4G network.
* Virtual keyboard pops up even though HW keyboard is connected via bluetooth
* Unable to change the layout of the bluetooth enabled hardware keyboard (default is US layout)
* Uploading files via browser may not work on some websites as the file-picker does not yet support multi-file selection mode
* The phone just reboots instead of doing the upgrade if there is not enough free disk space.

New connectivity stack for opt-in testing
We’ve been working for a while on updating connman ( the connection manager in SailfishOS) to a newer version. While it fixes connectivity issues in some environments, it comes at a regression risk in some networks. If you are interested in helping us out with testing, you can find more details in the hotfix-opt-in-hotfix-for-connectivity-in-upcoming-update-7 post.

Note to developers
* GConf has now been replaced with DConf. If you are using MGConfItem from mlite or the declarative plugin (declarative plugin is not harbour-whitelisted) then no action is required. mlite MGConfItem has been patched to use DConf as the storage backend. The class MGConfItem name though misleading, has been retained in order to prevent API and ABI breakage.

All GConf data will be migrated from GConf to DConf during the first boot after the update. Schemas however will not be converted to anything.

If you use gconf directly then please consider moving to MGConfItem instead. If you cannot then please realize that DConf API is not stable at all and it can change and break your application. Please consider moving to MGConfItem. gconftool-2 is now gone also and /usr/bin/dconf is the replacement. However care should be taken not to run dconf as root.